The Emperor is a shrewd business person and he knows just how to get the job done. Running a business requires focus, discipline, and the latest news about the market you are breaking into. Whether you own a small business or if you are a business manager, you will have to be at the top of your game to succeed.

Buying and selling stocks can be a great way to build up the finances you need for your business. Be sure to stay up to date on the latest activity in the stock markets by checking out business media outlets like the Wallstreet journal. 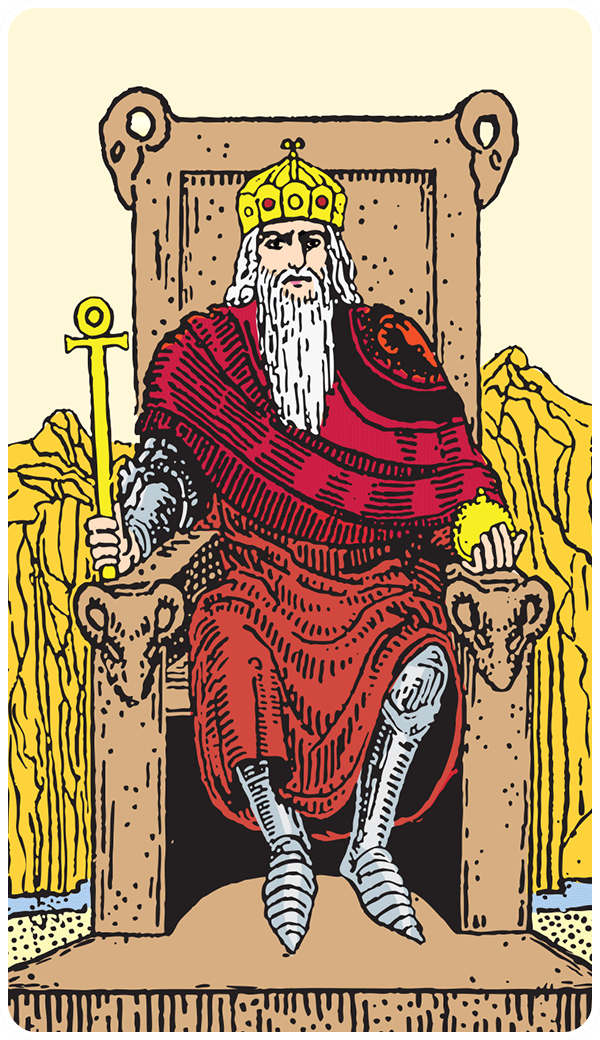 The Emperor is seated on a throne, surrounded by emblems of rulership. He has a commanding presence and expects submission. We have a father role here, while the Empress represented the mother. When you see The Emperor it means you have reached a point when you must learn to control and regulate your surroundings. The Emperor provides structure, but he must be careful not to impose his will on others. This card is about maintaining control over your environment, body, and emotions.

The Emperor represents a strong masculine influence. This may also include ideas in your life that have traditionally been associated with men, such as leadership and authority, self-discipline, and stability via action. It may foreshadow change or loss that requires you to move forward to take charge or bear a larger load than you have before. Whatever the catalyst for change, it suggests you have an unusual inner power that will drive you to act and lead.

The Emperor card depicts a man who is uncompromising and powerful. The throne on which he sits is sculpted with the faces of four rams signifying his connection to the sing of Aries. His crown is encrusted with tiny diamonds, which serve merely to emphasize his regal presence and the opulence his actions have afforded him. His scepter is modest, yet it has a long and powerful reach. He also wears armor under his regal robes, ready to fight or defend himself at any time.

The Emperor is the epitome of an ideal ruler. He can bring order to chaos and bring peace and prosperity to the world. Things are well organized, and the organization is the result of his hard efforts. His will is law, and the earth is subject to his command. Every day, he works tirelessly to provide prosperity, riches, and happiness to his realm. He regards it solely as his responsibility. The Emperor card encourages you to examine this energy and determine where it is weak or out of control in your life.


The Gentlest Touch Is Often The Most Powerful

A king may either be a good or terrible monarch. A good king does not burden his subjects with his demands; instead, he ensures that happiness is achieved via the regimen he establishes. His power is limited to ensuring the survival of his realm. But what if the monarch is bad?

A terrible monarch will either exploit his authority to manipulate his subjects or impose excessive order and structure. He will not tolerate anything that he does not consider to be consistent with his reign, even if it is not detrimental to the kingdom. A good monarch keeps the country under his control; a bad king oppresses the land until it crumbles under the strain.

Similar to how the Empress represents a mothering influence, The Emperor represents a fatherly influence. He instills a sense of strength, confidence, and ambition. When this influence is missing in a person's life it can lead to laziness, lethargy, and a hedonistic approach to life. At the same time, when this energy is in excess it can lead to work-a-holism and a lack of spiritual growth. Keeping this energy in balance is essential to leading a healthy and happy life.

When you draw this card, you should ask yourself the following questions: Are you a good or terrible king as the "king of your life"? What is your approach to dealing with other people in your life? Is your word binding? Are you a stickler about sticking to your plans? Do you make any plans at all? Do you feel in charge of your life? Do you need more or less of a regimen? Always ask yourself how you might create harmony to these male forces in your life while addressing the Emperor card.

What The Emperor Means for You Today

The Emperor has appeared to you today to encourage you to keep moving forward and not to give up on your goals. The Emperor represents a person with unshakable confidence who knows how and when to use his force of will. He also knows when the work he can do is done and when it's time to step back and let nature do the rest. If you've been working hard on something important to you, do what you can but remember that there needs to be a balance in how much willpower you exert each day. Working 15 hour days can only be sustainable for so long before you burn out and have to take an even longer break. Sometimes less is more.