The actual origins of Tarot cards are steeped in myth and mystery. One myth suggests that early Christians used story-cards, which later became the tarot, to spread the story of Christ under the noses of the Romans. This story, however, is unsubstantiated, and has been debunked by what we know of the tarot’s actual history. 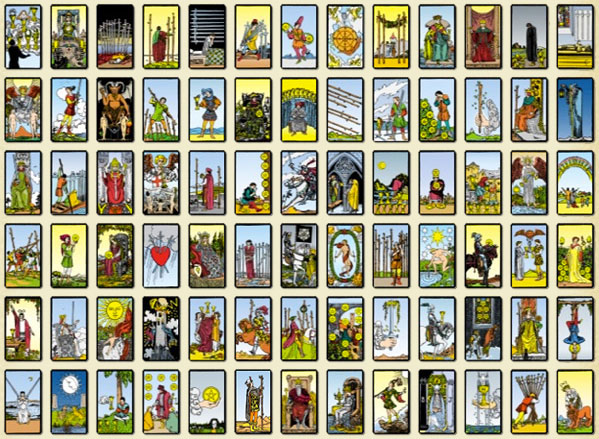 A picture of all 78 Tarot Cards

The word tarot is derived from the Italian word tarocchi, which has no known etymology. There are many theories regarding its origin. It may be derived from the name of an Italian river, the Taro. Or perhaps it is of Arabic origin, as playing cards originated in the Middle East, becoming common in Europe by the year 1377 C.E. 18th century occultists claimed the name Tarot came from the conjunction of two Egyptian words meaning “royal road,” which indicated that the tarot was the path to wisdom.

Playing cards, imported into Europe from Egypt, consisted of four suits similar to the ones we still see in tarot today: cups, swords, wands (or staves) and coins. As early as 1227 C.E., symbolic meaning was attributed to certain cards, some of which began to take on names such as “The Sun” and “The Moon,” etc. This attachment of symbolism to the cards heralded the development of the trumps. Occultists suggest that this evolution of the tarot coincides so closely with the rise of both the Kabbalah and the Inquisition that the symbolism entrenched in the tarot is really the hidden remnants of Pagan Europe struggling to survive.

Modern tarot decks, such as we know them, appeared in Italy in the 15th century as series of intricately painted works of art used to play card games. These decks consisted of a varying number of cards and were not specifically created for divination. The first such cards, usually created for noble families to celebrate special occasions, were known in Italy as trionfi (“triumphs” or later, “trumps.”) These trick-taking games later became known by several names, including Tarocchi, Taroc/k, Tarau,and Tarot. Some people even write it as tarrot, taro or tarro - but those spellings are very uncommon.

Some of the earliest Tarot card decks with cards still extant were painted for the Visconti family in the 15th century; remnants from three different decks still exist in various places around the world.

No one truly knows when playing cards began to be used for divination, although as early as the fifteenth century, additional picture cards (trumps) were being added to decks of playing cards. These cards depicted images of gods, heroes, or motifs to express philosophical, social, astronomical, or other ideals. The earliest known mention of the practice of tarot-style cartomancy appears in literature in the 16th century. By the 18th century, simple divination methods using cards appeared in several manuscripts.

As most early decks of Tarot cards were hand-painted, they were not created in very great numbers. The mass-production of cards was only made possible in 1440 C.E. with the invention of the printing press. Of these early printed decks, the most common is the French Tarot de Marseilles, which is still available today.

It wasn’t until the 18th and 19th centuries that the tarot was taken up wholeheartedly by occult and esoteric societies for use in divination. A Swiss clergyman named Antoine Court de Gébelin wrote a treatise called Le Monde Primitif (The Primitive World) which connected the imagery in the Marseilles tarot to the mysteries of Isis and Thoth, thereby forever linking the two. (Aleister Crowley would later take this up in his creation of his own Thoth deck.) De Gébelin made many assertions regarding the connection between the tarot trumps and Egypt; these were later debunked by Egyptologists.

In 1785 C.E., the French occultist Eteilla (Jean-Baptiste Alliette) became the first professional tarot diviner. He popularized the use of the tarot as a divinatory tool to a wide audience, and was the first to develop and publish a set of correspondences, linking the cards to astrology, the four classical elements (earth, fire, water, air), and the four humors (black bile, yellow bile, blood, and phlegm). These correspondences are still useful today.

Modern tarot decks contain 78 cards, broken into two sections, the Major and Minor Arcana (modern terms, used only in relation to tarot used for divinatory purposes). The 56 Minor Arcana, or pips, are broken into four suits of fourteen cards each. These cards are numbered one (Ace) to ten, and there are four “court cards,” similar to a regular playing deck, only with one additional face card. The 22 Major Arcana, or trumps, are numbered 0 through 21, although some people exclude the Fool (0), considering this card to be outside the deck, a sort of “wild card,” rather like his descendant, the Joker.

Over time, many great thinkers have added to the deeper understanding of the Tarot cards. Carl Jung connected the symbology of the trumps to archetypes, concluding that the tarot might play an important role in psychoanalysis. The Hero’s Journey discussed by Joseph Campbell laid the foundation for the Journey of the Fool, who jumps heedlessly off a cliff only to come full circle into the position of magician. The archetypal symbols in each card tell a story, and therefore clue the reader into what influences are appearing in the querent’s own life.

Archetypal symbols alone do not explain, however, how the tarot works; even Jung could not explain that. It is the power of the reader, using his intuitive mind to relate the pattern of symbols expressed in the particular layout, that allows us to bring clarity into our lives as we seek to unravel our own mysteries.

The history of the tarot is a rich and powerful one, and these mystical cards give us an opportunity to peek into our own past, present, and future, influencing our own journey from Fool to adept.

The Suit of Cups

The Suit of Swords

The Suit of Wands

The Suit of Pentacles