The Four of Swords depicts a man resting on a bed, so this card signals it might be time to get a new mattress! There are different types of mattresses, from memory foam to springs or some sort of hybrid combination. One potential problem with memory foam mattresses is that they can get quite hot, so make sure you get one with cooling features. The best mattress is the one that is most comfortable to you, so be sure to try one out before you buy it!

A good general sized mattress is a Queen, and if you’re looking for something bigger try a California King. Sealy and Serta and excellent brands if you are in the market. It used to be that mattress shopping only made sense in person, but now there are several great offers online. So when you are looking to buy a mattress for your bed frame, look online for the best price! 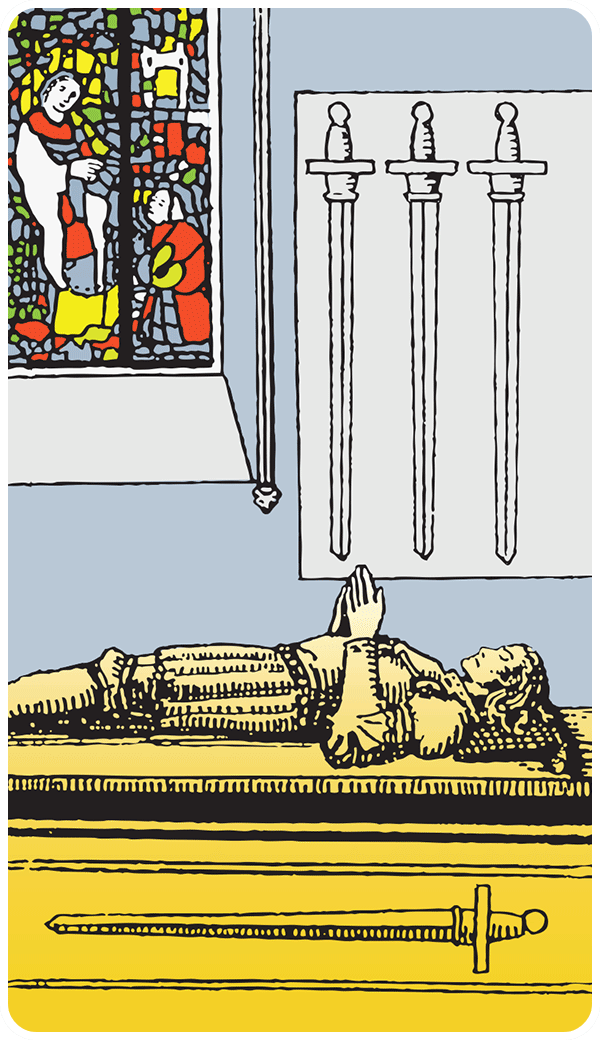 This card depicts a young man asleep on a bed or tomb with three swords above him and one beneath him. Is he dead or merely resting? This interpretation is up to you, for this is a card of contemplation and deep introspection. The Four of Swords appears when you need to take some time to relax, reflect, recuperate, and find your way back to yourself. The fight is done, and now comes a period of brief respite.

Lay down your sword, stop fighting, stop confronting, stop dealing with objections and difficulties, and let your wounds heal.

The Four of Swords provides retreat from the conflicts in your life, representing order and stability mixed with the turbulent character of the Swords. Rest and recovery are essential, as is taking this time to heal. Although the calm may only be brief, enjoy it while it lasts. It may be a sign that you're on the mend after a lengthy sickness.

According to legend, before a man could be knighted, he was required to live in utter solitude and quiet. He vowed he would not talk to anybody or see anyone else until the morning of his knighting. This typically began the day before and lasted far into the evening. The knight would spend his watch in prayer, promising that he would do his best to serve his deity, that he would be honest and just, and that he would do no evil. He prayed to make sure he was on good terms with his deity, that no wrongdoing had gone unpunished, and that he could spend the rest of his days fulfilling his responsibilities to his monarch. This is the Four of Swords' nature.

For those who have visited a cathedral or a tomb, the picture of the Four of Swords card may be recognizable. A tomb is in the foreground, with a stone sculpture depicting a “sleeping” (perhaps dead) man with his hands folded and his head on a cushion laying on top. The man does not appear to be in agony; rather, he seems to be relaxed and at ease. One sword rests on his tomb, or bed, reflecting this idea that he has lay down his arms, finally, to rest and relax. The three additional swords hang behind the tomb, along with the stained glass window depicting an adult and child. This represents forgiveness and the healing that comes with forgiving one's self for life's transgressions.


The most prevalent connotation of this card is pausing to reflect. The Four of Swords, like the knight, may be urging you to take some time to be quiet and observe what is behind you and what is ahead of you. We seldom devote as much time to meditation or reflection as we do to talking and doing; maybe if we did, there would be less misery and anguish in the world.

This card may also represent a time of healing; one brought about intentionally by making time for rest. We occasionally need to take a step or two outside of our regular routines to rest, whether it's due to a bodily or mental ailment. In our fast-paced, relentless society, many people feel guilty if they rest or slow down becuase of fear of letting down those they are about. If you need the down time, take it. Embrace a slow recovery - a day off from work isn't going to cut it: even a little cold needs longer recuperation than that.

Finally, this card invites us to consider the beyond and its significance in our lives. If the man in the image is, in fact, deceased, then he is in the midst of the last rest. So, what does this imply for you? What would you do if you knew you were about to die? Would you be willing to make amends with family members? Spend all of your time with the people you love? What's keeping you from doing it now, rather than waiting until that fatal day? Many people on their deathbeds don't wish they had worked more or spent more time seeking financial security; instead, they wish they had spent more time with the people they care about. This is food for thinking.

When you see the Four of Swords, keep this in mind. When was the last time you sat quietly, reflected, and meditated? What would be the advantage to you? Is there any disadvantage to spending time apart? Is there anything you need to get back on track with? Could you rest in peace knowing you have accomplished all you want in this life, or is there still something you wish to achieve?

What Four of Swords Means for You Today

Have you been spending a lot of time in your head lately? The Four of Swords is a sign of this deep introspection and a signal for you to pay attention to your inner voice. There is a question on your mind as of late. One whose answer seems to elude you the more you try to search for it. But if you try to consider the bigger picture of your life and view events and situations through a wider lens, the answer will reveal itself to you. This is a perfect time to reflect on what is important to you and whether or not you are on the right path, especially when it comes to work or career. You are going to gain some invaluable knowledge from deep within you that you will need for later on, so listen to your intuition.